Plotting as a Puzzle

I’m currently working on edits to an upcoming story.  My editor asked for some changes and as I’m working on this, I can see how I can address some issues by moving scenes around.  It’s like an elaborate puzzle in my head.  Everything has to fit.  How can you move chunks of a story around and have it still make sense?  It’s like taking the puzzle shapes and modifying them a bit to make them fit somewhere else.  I might have to add something here and remove something there, but that’s fun to me.  I consider it a challenge and if it will improve the story, I’m more than willing to go in there to cut and shape and pad.  Usually, the problems are there because the story was out of order in the first place.  Sometimes, scenes don’t fit at all and need to be cut entirely.  That’s when you, the reader, get those extra “deleted scenes” that you love so much.  Perhaps I’ll have some of those when this whole process is through.  It’s a puzzle piece that just doesn’t fit, no matter how much you want it to.

It’s all about perspective.  Sometimes as a writer, you’re looking so closely at each puzzle piece or scene, you forget that the reader is focusing on the story as a whole.  The pieces not only have to fit, they must make that picture as pretty as can be.

Win a print copy of LEXIE I received my author copies of LEXIE today.  They’re so pretty!  Book 1 of the Triple X series doesn’t go on sale until September 3, but I’ll be having a contest for subscribers to my newsletter.  Win, and you’ll get a signed copy.  Sign up for the newsletter here.  More information will be coming in the edition I plan to send out (on or about) June 30. I finally got around to cleaning up all the stuff I collected at the RT convention last month.  I know it’s been a while, but I was on a writing deadline so it sat in a heap in the corner until I had time.  It’s amazing all the swag one collects at these things.  There’s pens and pencils, post-it notes, key chains, card decks, and all kinds of postcards, bookplates, and little booklets.  Plus bags.  Lots and lots of bags.  For some reason, though, authors seem to also collect a lot of hats.

I don’t know why this is.  I look terrible in hats, and they always give me hat hair.  They probably give us hats to make us easy to spot in a room, but it got me thinking about other reasons.  Authors do tend to put on different hats as they’re writing characters.  We have to learn about occupations from cowboys to policemen to soldiers.  I don’t think any of my characters so far would wear the hats in the picture, though…

These days authors have to wear different hats for their own job, too.  Not only do we have to hone our writing craft, we now also have to become skilled marketers, public speakers, web site developers, and even publishers.  Whether you’re writing with a large publishing house or doing the indie pubbed thing, authors are expected to do more than ever before.  It can be exciting to wear the different hats and assume more control over one’s career.  It can also be overwhelming.

So yeah, the more that I think about it, the more appropriate the hats are.  But I haven’t received the one that most aptly portrays the writing field yet — a hardhat.

Great news!  Private Dancer is a finalist in the contemporary category of the Passionate Plume contest held by the Passionate Ink chapter of the Romance Writers Association.  Winners will be announced at the RWA National Conference in Atlanta in July.

I’ve decided to start a newsletter, since I’ve got so much going on this year.  If you’d like to receive a copy, hop on over to the Mailing List page and fill out the short form.  You’ll receive the quarterly newsletter, emails about upcoming releases, exclusive excerpts from upcoming books, and other fun information.  This won’t be a high volume list, but if you sign up, expect to find something occasionally in your in-box.

Maxie, Book 2 in the Triple X series will be releasing on August 20.  Hard to believe, but that’s not so far away.  I’ve posted an excerpt from the book for you.  Just click the link shown below.

Maxie’s quiet, predictable routine is shattered when she steps outside her flower shop and almost runs into two women. It’s not the near collision that’s startling. It’s the strangers’ faces. It’s like looking in a mirror times two, and it sends her into a dead faint.

Sheriff Zac Ford sees three identical copies of the woman who’s caused him more sleepless nights than he can count, and it stops him in his tracks. Maxie’s buckling knees snap him out of his trance, and he catches her before she hits the cement.

Two sisters she never knew she had? Maxie can’t deal with this turmoil, not on her own. She needs a shield, a rock. For the first time in her life, she takes a wild leap of faith.

When Maxie calls him her boyfriend, Zac has no trouble playing along. It’ll give him time to figure out what these “sisters” want. Soon, though, for-show kisses get hotter and playacting touches grow bold. And Maxie must choose to stay in her safe little world, or grab life by the horns. 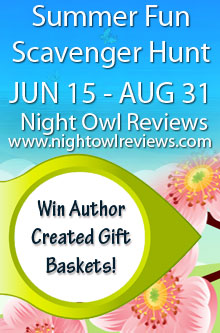 I’ll be participating in Night Owl Reviews Summer Fun Scavenger Hunt.  If you haven’t participated in this before, it’s a lot of fun.  You can find a lot of exciting new authors and win great prizes.  I’ll be giving away a set of 3 Czech crystal braces to celebrate the release of Maxie.  Entry opens June 15.

I spent most of the month of May working hard towards a deadline.  When I’m in that frame of mind, everything else gets pushed into the background.  The house goes uncleaned, chores go undone, and I disappear from the radar of all my friends and family.  It’s self-imposed isolation, and I suppose it’s good for the story.  When that deadline passes and the story is put to rest, though, it’s time to re-enter the real world.  It feels a bit strange to be excited about paying bills and weeding the flower garden, but that’s where I am right now.  I have so many things I want to do that don’t involve sitting in front of a keyboard.  This down time is important for recharging batteries and getting the creativity brewing again.

However this, too, shall pass.  Soon, the urge to write will return and I’ll be moving back into the planning stages for my next project.  I will tell you that I already know what my next project will be, but I wouldn’t actually consider it new.  It’s more of an old project that I’ll be picking up again.

Yes, for all of you who’ve asked, I’m going back to the Dream Wreakers.

I went to see Iron Man 3 tonight, even though I’ve got a writing deadline that’s approaching like a rampaging horse.  The movie was okay, but not my favorite of the series.  We stayed through the credits, awaiting the teaser that always follows Marvel Comics movies, when something appeared that made my guilty conscience cringe.  There it was, right in the list of credits — the name of my book’s hero!   Agh!  Nabbed.  So yes, here I am at the keyboard late at night trying to make up for precious lost time. I feel the need to clear up some things, though.  The original title of this book was not High School Reunion.  I don’t remember what it was, but I’ll admit the draft title wasn’t very good.  High School Reunion didn’t do much for me, but the editor liked it.  The heroine’s name also started out as Rory.  Cheek (original publisher of the book) was located in England, however, and apparently Rory is strictly a man’s name over there.  My editor suggested Roma, which I thought was really cute.  We decided to go with both.

That was when it hit me that I was putting out a book called High School Reunion with characters named Roma and Missy.  Sound familiar?  As in Romy and Michele’s High School Reunion?  Aggg!  I was horrified, but my editor didn’t think it was a problem.  Well, okay.  That’s how things sometimes go for writers in the traditional publishing world.  Today, I would have fought a bit harder to get at least one of the two changed so it didn’t look like a blatant rip-off.  Back then, I was over-ruled.