This is the last day Everlasting will be free on Amazon.  Don’t miss out.  Download your copy now! An Excerpt From:  EVERLASTING

He couldn’t take his eyes off her.

And she couldn’t stop staring at him.

The air practically crackled as they watched each other. Somebody finally coughed and the moment was broken. Rubbing her hand nervously on her thigh, Chevon looked around the reception area. “Could we have some privacy?”

One soft request and her coworkers scattered. Trey watched as, slowly, she made her way down the stairs. Her movements were graceful, but she was nervous. He could tell by the way she clutched the banister as she neared him. “Careful,” he said when her fingers skimmed over the decorative wooden globe atop the final post.

Her gaze flashed to his, but then skittered away again. She hugged the folder she was holding in her left hand closer to her chest. “Could you follow me, please?”

She turned towards the lobby, and his gaze ran down her sleek figure. She’d taken care with the way she’d dressed. The colors she wore were subdued, and her hair was pinned up in a way that must have taken hours. She looked professional, but he doubted she realized how well that fitted skirt cupped her backside. Or how her high heels lifted it just so…

He shifted uncomfortably. She’d look sexy in a potato sack, but it didn’t take a genius to see that she was skittish around him. And no wonder. He’d screwed her silly last night. If she had any woman’s intuition at all, she’d know that he wanted to do it again.

Read more Hot and Bothered excerpts at the Book Boyfriends Cafe by clicking the picture below.

What a great week.  Everlasting has also hit #1 on an Amazon list. 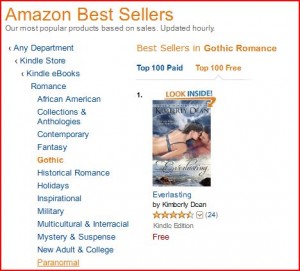 The story will be available for free on Amazon now through Friday only.  Download your copy today!

(All books are in English.)

Celebrate Spring with a Free Copy of Everlasting (#MFRWauthor)

I’m so happy spring is here, I’m hosting a quick giveaway of Everlasting March 11-13.  The promotion will be running at Amazon only, but all over the world.  Get your copy while it’s still free! The Romance Reviews has made EVERLASTING a Top Pick!  “This book is temptation incarnate.  The words flow off the page in a sinfully inviting manner, drawing you in like a lover’s warm embrace.”

Woohoo!  I like that.  Check out the full review at The Romance Reviews.   For more information about EVERLASTING, click here.

EVERLASTING  is now available as a Kindle e-book.  You can download it for $2.99 here. EVERLASTING is now on sale as an e-book.   You can find it at Barnes and Noble for only $2.99.  It will also be available soon to Kindle users, hopefully later today.

EVERLASTING
When Chevon takes an impulsive road trip, she doesn’t expect to stumble across her distant past.  Lost in a thick, unpredictable fog, she finds the Everlasting Inn.  The remote house on the cliffs is a haven, yet it evokes erotic thoughts and haunting memories.  They consume her until she realizes that she’s been to this house before… in another life!  When the inn’s new owner shows up, she realizes that time is repeating itself.  It’s up to Trey to break the cycle for these star-crossed lovers, but he’ll have to fight to prove that their love is truly everlasting.

Another excerpt from EVERLASTING

Only 2 days until release…

It wasn’t fear, he suddenly realized.  That damned heavy feeling of apathy was back – just like in his dream.  Depression seemed to be lapping over him every time the tide came in.  The longer he stood there watching the water, the stronger the feeling of bleakness grew.

There was no reason for it.  The sense of loss and betrayal…  They weren’t real.

Stubbornly, he made himself move closer to the cliff’s edge.

If he backed down now, it would only get worse.  A chill raked his body, even though it had to be seventy degrees.  He braced himself.  Where were these feelings coming from?  They felt familiar somehow, but they weren’t his.  Was it this place?  “Just one more,” he told himself.

One more step, and he’d be satisfied.

“Wait!” a voice suddenly called out from the darkness.

His surprise quickly became shock as a feeling of hope unfurled inside his chest.  But…  No, it couldn’t be.

He spun around.  When he saw a figure in flowing white running towards him along the cliff tops, his heart nearly burst out of his chest.

Trey couldn’t have moved if he’d tried.  He knew that voice.

So did his cock.

It slammed to attention as he watched the most beautiful woman he’d ever seen come out of the mists.  Lit only by moonlight, she was a vision.  Her face was delicate and surrounded by cascades of curly brown hair.  White silk clung to her curves, but it parted around her long, sleek legs as she ran full-stride towards him.

“You!” he said in disbelief.

Trey stumbled back at the impact, but caught her close.  She felt warm and soft against his chest.  With as tightly as she clung to him, he could feel every inch of her.  And every inch was pure heaven.  His brain scrambled as he felt high firm breasts, long sleek thighs, and a snug warm notch cradling his stiffening cock.  She shuddered hard, and a strangled sound escaped his throat.

“I’m sorry.” One of her hands cupped the nape of his neck and the other rubbed his back.  “I’m so sorry.”

Trey was dumbfounded.  Who was she?  Where had she come from?

What the hell was going on?

“Sorry for what?” he managed to ask.  It was nearly impossible to think with her sweet little body molded against his.

“I’ve been waiting for you to come back.  I won’t leave you this time.  I swear.”

Relief poured through him, confusing him even more.  “Come back?  What are you talking about?”

“Shhh.” She turned her head and tucked her face against his neck.  “Please, come away from the edge.  You don’t need to go in the water anymore.”

Trey jolted.  The water.  How did she know about the water?

The release date for EVERLASTING has been set for September 8, 2011.  That’s this Thursday!  Buy links will be posted as soon as the book is on-line and available.  So exciting!