I just found this stamp of approval for Roxie from the Breathless Ink review site.  I think they liked it.  🙂 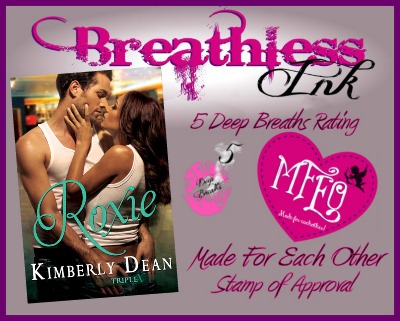 Roxie available at All Romance Ebooks

If you’re looking for other formats for Roxie, try All Romance Ebooks.  The book just became available here.

Only one week until Roxie will be available in electronic format.  I’ve already started loading the book to stores.  I’m trying to account for the holiday weekend.  If the book isn’t available on the 8th, it should be on sale soon thereafter.  I’m also working on making the book available in print through CreateSpace.  I hope to have those books available before the end of July.

Also, you might have noticed that I’m running a contest through Goodreads for print copies of Maxie.  I got my author copies and decided to share.  See the link in the right sidebar to enter.

Roxie’s heels clomped across the hardwood floor until she stood directly between the two of them. Thrusting out her empty coffee cup, she looked at him sternly. “Don’t try to charm my sisters.”

“I’m not trying, baby, I am charming.” He let one eyebrow lift, but freshened her cup anyway.

Their gazes met in silent challenge, but there was something more in her eyes . . . a kind of fear . . .

Billy paused. He knew her well. To some, she might seem tough and rowdy, but there was an insecure side to her, too. Every foster care kid had one.

“I know which one is you, Roxie,” he said, for her ears only. He wouldn’t play on that fear, no matter what happened between them. “I’m not looking to upgrade.”

Her gaze dropped to her cup of coffee, but instead of drinking it, she ran her finger around the lip of the cup.

“Believe me, I know which one runs on high octane fuel,” he said softly.

That round-and-round motion hitched, and her gaze lifted. Her eyes were big and brown, and he saw how her pupils dilated. Desire set inside him like a racer wanting the checkered flag. That little romp last night hadn’t been nearly enough to keep him going. He’d been running on fumes for too long.

And last night had been different. It had just been . . . more.

In the wee hours of the darkness, she hadn’t been able to keep her emotions locked down so tight. The sex between them had always been hot, but the way they’d touched only hours ago? It had been more like in the beginning, when the need to connect had been overpowering.

“Want to go back upstairs and wake each other up properly?” he asked.

Her fingers tightened around her mug, and her teeth sunk into her lower lip. She leaned forward over the bar. She had him poised, holding his breath, but then she pulled back with her long hair swinging. “I can’t.”

She took a deep breath, and his gaze dropped to the clingy top she wore.

She glanced over her shoulder. Seeing they were being watched, she flicked a finger at the donut box, opening it. “I can’t leave my sisters,” she said as she plucked out a chocolate treat.

She left him feeling hungry as she walked back to the table, hips swaying.

Billy didn’t know if the growl that came out of him originated in his throat or in his belly. Following her lead, he grabbed a bear claw.

He looked over all the pretty dark heads.

Can a wild child ever really be tamed? Growing up in foster care has made Roxie Cannon tough, sassy, daring, and self-reliant. But being alone isn’t all it’s cracked up to be. She’s finally found family. Is it time she met her match?

Roxie should be on top of the world. She’s formed bonds with identical sisters she never knew she had, and she’s buying the bar she’s managed for years. The feisty brunette has everything she’s ever wanted. Almost. Two things still elude her: answers to why her family was split apart, and a man with whom she can share her passion. Seeing her sisters with their mates has made her aware she’s still the odd one out. Yet that all starts to change when a rough-and-tumble hottie from her past walks in the Ruckus’ door.

Billy knows trouble when he sees it. With her long legs, angel face, and pistol attitude, Roxie is commotion in motion. They’ve always set sparks off one another. This time, he’s promised himself he won’t get burned. Yet things get serious when he learns of Roxie’s quest to find her parents. Can he save his hot-blooded lover from being hurt? Or will the wounded little girl inside her never trust him again?