As a kid, I went to school with a lot of twins. Back then, I didn’t realize how unusual it was. Looking back, there must have been something in the water. We had every kind of twins from fraternal twin sisters (one redhead, one brunette) to boy/girl twins to ide 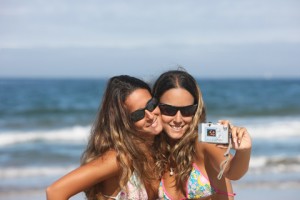 The fraternal twins acted primarily like brothers and sisters who just happened to be born on the same day. The identical twins, though, had closer bonds. They were inseparable outside of class and always seemed to be on each others’ wavelengths. There were so many things about them that were alike, but as their friend, I could always tell them apart. All it took was a glance or the sound of a voice.

As we rose in grade levels, we just kept adding sets of twins. There were two more sets of identical girls, another boy/girl set (who did not get along at all), and a set of triplets  (one boy and two girls who looked identical). I was around them all a lot, and I thought it was just so cool. I guess even back then I was an observer of human nature.

It was many years later when I came up with the concept for my Triple X series about identical triplets reuniting and finding the men that they love. I wasn’t consciously thinking of my old classmates, yet I know my childhood experience helped me flesh out the characters. I knew firsthand the connection that Lexie, Maxie, and Roxie should have.  More importantly, I knew how they should be different. Identical siblings can be close, but they’re not interchangeable. They’re individuals with their own interests and personalities. They just happen to be part of a very close, matched set.  That’s why I gave each of my triplets her own book. Each sister had a different story to tell, yet as a set, they made up an even stronger trilogy.

So are any of you a twin or triplet? Do you agree that identical siblings have a unique, almost psychic bond? Or is that just make-believe?